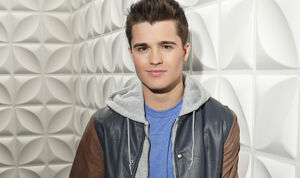 Aaron Moon is a 25-year old famous singer, dancer from San Francisco. He is Austin Moon's adopted brother. He is months older than Austin and acts as a role model to Austin. Austin looks up to him and is his inspiration to become a rockstar like him. He is portrayed by Spencer Boldman

Aaron is wacky and charming which attracts many girls. He often jokes around and is always gone for important matters about his career. Lexi is his girlfriend whom she met in San Francisco. He is always the leader when it comes to doing monkey businesses especially pranks. He is like Austin who sings, dances and plays instruments. He is almost like Dez, who is often childish and not that smart. When he was ten, he went back to San Francisco to find where his parents were but instead became a singer dancer. He became famous after he is invited by Selena Gomez to perform in one of her concerts.

Aaron has a fear of Dentists when an accident happened to him when he was young. He was able to conquer his fear with the help of his friends. Although not that good with academic subjects, he might have some potential in some sports.

Aaron is supportive of his family and friends, although most of the time he does not know what he supports them in. He has his moments when he can solve problems and be as smart as the others. Aaron also gets nightmares whenever he watches horror movies, as seen in "Movies & Marathons", and screams in his sleep while having the nightmares. His parents died when he was two years old, as seen in "Dramas & Departures" when his Private Investigator called him.

He treasures his friends and adoptive family very much, choosing to be with them rather than to go back to his birthplace to find who he really is in the finale episode of Season 2. In the finale episode of Season 2, it is also revealed that Aaron's real last name is Jacobs. It is unsure if Aaron was the name his biological parents gave him or not.

Aaron Moon goes to Miami with his girlfriend Lexi Reed. They are introduced to Austin's friend. After staying in the Sonic Boom, they get stuck after a storm hits Miami.

Aaron helps Austin get over his nightmares in order to perform at one of the famous nightclubs in Miami.