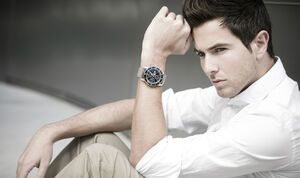 Aaron Renfree is an english actor, singer, model from England. He portrays Laith.

Aaron was once a member of the pop group S Club 8 (formerly known as S Club Juniors), they achieved 6 top ten hit singles and 2 top ten albums, the first of which went platinum. They were winners of the Disney Channel Awards for Best Newcomers and nominated for Record of the Year 2002 for 'One Step Closer'.

Live performances include Queens Golden Jubilee, Prom in the Park 2002, The Royal Albert Hall and Children in Need as well as regular performances on Top of the Pops, SM:TV Live, CD:UK and The Saturday Show. In 2003 they embarked on their own sell-out UK tour S Club United performing in front of a total of over 200,000 people. The band then went on to have their own hit tv series on BBC called "I Dream" that was filmed in Barcelona

After the bands success, Aaron went back to college and trained at Laine Theatre Arts where he graduated with a National Diploma in Musical Theatre. He then went on to become a part of the original cast of 'Flashdance' the Musical which toured the UK in 2008/09 followed by his west end debut in 'We Will Rock You' 09/10

Aaron is very passionate about choreography and was assistant choreographer and show director of the X Factor Live Tour's in 2009 and 10. He also choreographed for recording artist Little Boots and has been involved with numerous charity events such as West end Eurovision and Westend Bares.

Retrieved from "https://ahighschoolrockstar.fandom.com/wiki/Aaron_Renfree?oldid=7015"
Community content is available under CC-BY-SA unless otherwise noted.