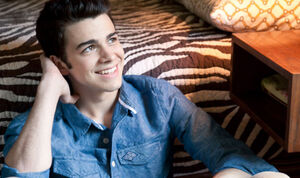 Adrian Clarence is a guest character featured in Season 3 of A High School Rockstar. He is the president of Miami Senior High School but was voted out. He is portrayed by Joey Pollari.

Adrian Clarence is the previous school president of Miami Senior High. He participates a lot in school, as seen in his position in the school government. He is a good student, finishing and handing in his school work on time. At first, Adrian shows himself to be very polite and gentle. He messes up his words when he is asking out a girl, unless he is just acting.

In the middle of the episode, Adrian shows his true self. He is bossy, pushing around his friend, Glenn, to do his errands for him. He complains that he does everything himself, when in fact he orders people around to do it for him. He also have not had a girlfriend, which made him do the bet Dylan said. He takes things seriously, as he took Dylan's bet serious even though it was meant to be a joke. He also likes when he gets publicity from people, including when Ally called him to the stage.