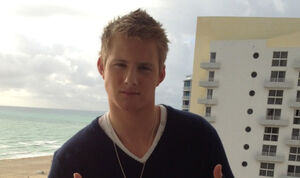 Alexander Ludwig is a Canadian actor, singer and model. He played Will Stanton in the 2007 fantasy film, The Seeker: The Dark Is Rising. In March 2009, Ludwig appeared in a lead role in Disney's Race to Witch Mountain. In 2012, he played Cato, the male tribute from District Two, in The Hunger Games.

Ludwig was born in Vancouver, British Columbia. He has three younger siblings: a sister and brother, who are twins, and a younger sister. His mother, Sharlene (née Martin), is a former actress, and his father, Harald Horst Ludwig, is a businessman, the Co-Chairman of the Board for Lions Gate Entertainment Corp. The actor was drawn to the profession, saying in an interview, "I have a big imagination. I love performing." Yet, despite his mother's early career as an actress, Ludwig had to convince his parents to support his desire to pursue a career as a child actor. His parents believed that child actors "can get sucked into a life that isn't reality."

Ludwig began his career at the age of nine when he featured in a Harry Potter toy commercial, a job that enabled him to sign on with an agent and obtain more commercial work. Later he was cast in movies such as Air Bud World Pup (2000), MXP: Most Extreme Primate (2003), Scary Godmother: The Revenge Of Jimmy (2005), Eve and the Fire Horse (2005), The Sandlot: Heading Home (aka, The Sandlot 3) (2007). In addition to cinema, Ludwig has also worked in television. He has performed in movies made for television, such as A Little Thing Called Murder (2006), and series television such as The Dead Zone. Ludwig obtained his leading role in The Seeker: The Dark Is Rising (2007) after a "gruelling audition process." By his count, he had 16 auditions before finally being cast.

Ludwig's next lead role came in the part of Seth — one half of a teenage, alien brother-sister duo — in the film production of Race to Witch Mountain (2009), also starring Dwayne Johnson, the professional wrestler turned actor. Seth is the part originated by Ike Eisenmann in the 1975 original, Escape to Witch Mountain. The film opened at number 1 at the box office the weekend that it premiered with receipts estimated at $25 million. Whereas the casting process for The Seeker had been arduous, getting the part for Witch Mountain was relatively painless. From the moment Ludwig auditioned, the director knew that he was the actor he wanted for the role of Seth.

Despite his early casting success with The Seeker, Ludwig indicated in a contemporaneous interview that it was his intention to attend university. In another interview, the actor said that the most challenging thing about filming The Seeker was trying "to juggle school while filming. My school wasn't used to it, and I wasn't used to it. It was the most amazing experience, but it was really hard." Ludwig is enrolled as a theatre major at the University of Southern California, and lives full-time in Los Angeles.

In the movie adaptation of The Hunger Games, Ludwig played Cato, the fierce male tribute from District 2, the primary threat to the protagonists' lives during the Hunger Games, and the last to die before the lead duo are declared co-winners. The film was released worldwide on March 23, 2012. He released his new single "Liv It Up (Teenage Wasteland)" on March 1, 2012. Ludwig has also won an award for Best Fight on 2012 MTV Movie Awards with Jennifer Lawrence and Josh Hutcherson as well as an award for Best Villain at the 2012 Teen Choice Awards. In 2013, Alexander Ludwig, modeled for Abercrombie and Fitch, Hot Stars on The Rise.

Retrieved from "https://ahighschoolrockstar.fandom.com/wiki/Alexander_Ludwig?oldid=8934"
Community content is available under CC-BY-SA unless otherwise noted.