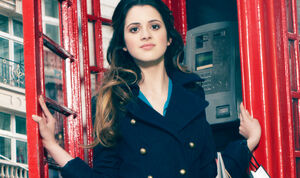 Ally Dawson is a 25-year old aspiring songwriter who can't show her talents to the world because of her extreme case of stage fright. She wrote the song that made Austin Moon an overnight internet sensation. Ally hopes that someday, she will be able to overcome her fear and be as cool as Austin and fulfill her dream of being a famous songwriter, especially for Austin. As she explores with her friends, Ally realizes she has more than everything a girl can every have. A Sweet boyfriend, supporting friends, and a caring father. She is portrayed by Laura Marano.

Ally, born and raised in Miami, is a shy girl who loves writing lyrics and making songs. She also really cares about helping her friends which often puts her in uncomfortable, but hilarious, situations. She has an extreme case of stage fright, which is not yet revealed to why. She is a goody goody which often helps her and her friends to get out of trouble. She chews her hear and talks a lot when she gets nervous. She doesn't like it when people touch her journal/songbook/diary and always says "Don't touch my book!". She is in love with one of her best friends Austin Moon. She said yes to Austin after he asked her out in the episode Songwriting & School. She takes care of Sonic Boom, a music store owned by her father Lester Dawson. She rarely talks about her mother. She always has bad experiences, especially at the beach but got over it after remembering all the fun memories she had when she was young. She tried overcoming her fear of Stage Fright in "Frights & Fights" but failed.

As she meets people with the same fear, she tries to do the best she can to break her fear eventually. Ally eventually overcomes her stage fright with the help of her friends and family. She is introduced to Sarah Vinyl who eventually asks her to be part of Vinyl Records.

Ally attends her first day of school in High School. She helps Austin with his upcoming gig at the mall but sees that Austin is having difficulties focusing. She herself can't focus because of her feeling towards Austin. When Austin finally confesses his love to here, Ally says yes to him.

Ally goes on a date with Austin at the Red Lovester. She has no choice but to leave Trish & Dez in charge of the store, which she thinks was a bad decision. While on the date, Ally almost got to her first kiss with Austin but was interrupted. When she got back to the store, Ally finds it in a mess and expects Trish & Dez for an explanation and to clean up the store.

Ally is excited to see Austin's surprise guest. It is her old classmate from kindergarten Aaron Moon. She finds out that he is Austin's adopted brother. She gets to know him and Aaron's girlfriend, Lexi Reed but after a storm hits Miami, they get stuck in the storm. She then realizes about the fire escape that they used to get out of the store.

After Austin gets a gig at a famous nightclub, Ally stops to nothing to give Austin the best performance he can. But after Austin keeps having nightmares which kept him awake every night, Ally tries to help him get over his nightmares.