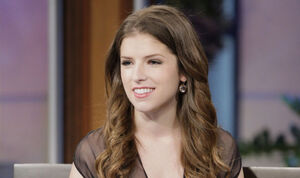 Anna Kendrick is an American actress and singer. She rose to international fame after her performance as Natalie Keener in Up in the Air (2009), for which she received Academy Award, BAFTA, Golden Globe and Screen Actors Guild Award nominations for Best Supporting Actress. Her other notable roles include Dinah Lord in the Broadway musical High Society (1998), for which she was nominated for a Tony Award; Fritzi Wagner in Camp (2003), Ginny Ryerson in Rocket Science (2007), Jessica Stanley in The Twilight Saga (2008-11), Stacey Pilgrim in Scott Pilgrim vs. the World (2010), Katherine McKay in 50/50 (2011), Janet in End of Watch (2012), and Beca Mitchell in Pitch Perfect (2012).

Kendrick was born in Portland, Maine, the daughter of Janice (née Cooke), an accountant, and William K. Kendrick, a history teacher who also works in finance. Kendrick and her older brother, actor Michael Cooke Kendrick, who appeared in the 2000 film Looking for an Echo, both attended Longfellow Elementary School, Lincoln Middle School, and Deering High School in Portland. Kendrick is of English, Irish, and Scottish descent. Anna Kendrick is amazing and a role model to other people I loved her role in twilight.

Kendrick started her career at the age of 10, when she caught a bus from Portland, Maine, to New York City so that she could attend auditions. Kendrick's first acting role was as Dinah in the Broadway musical High Society in August 1998 when she was 12 years old, a performance for which she won the Theatre World Award and was nominated for a Tony Award and a Drama Desk Award, making her the third-youngest Tony Award nominee.

Kendrick went on to appear in a number of other theater productions, including the musical A Little Night Music, playing Fredrika Armfeldt in the New York City Opera production, before making her film debut in the 2003 musical comedy Camp, for which she was nominated in the Best Supporting Actress category at the 2004 Chlotrudis Awards and Best Debut Performance Independent Spirit Award for her portrayal of Fritzi Wagner.

In 2007, she appeared in her next film, Rocket Science, in which she portrayed Ginny Ryerson, a fast-talking high school debater. Although Kendrick said she found the role intimidating and challenging after watching an actual national collegiate championship debate, her performance was praised by critics and she was nominated for an Independent Spirit award for Best Supporting Actress. In late 2007, she auditioned for the role of Jessica Stanley in Twilight, a 2008 film adapted from the first book of the novel series by Stephenie Meyer. She had intended to do a mix-and-match audition with various actors, but was too ill and had to leave; she was, however, brought in for a later session where she was given the role. Kendrick reprised her role as Jessica in the first three Twilight sequels.

Kendrick's theatre singing experience gave her the opportunity to star in her next project, 2009's The Marc Pease Experience, where she appears opposite Jason Schwartzman and Ben Stiller as a high school senior involved in musical theater. She appeared in the 2009 films Elsewhere, in which she plays her first lead character, a girl whose best friend (played by Tania Raymonde) goes missing, and in director Jason Reitman's Up in the Air, based on Walter Kirn's 2001 novel of the same name, alongside George Clooney and Vera Farmiga. For her role in Up in the Air, the National Board of Review named her Best Supporting Actress, and she also picked up nominations from numerous critics awards, The Golden Globes, The Screen Actors Guild and the Academy Awards.

She reprised her role as Jessica Stanley in The Twilight Saga: Eclipse. Screenwriter Melissa Rosenberg devised a graduation speech for her character that was not part of the novel. She appeared in Edgar Wright's adaptation of the graphic novel Scott Pilgrim, titled Scott Pilgrim vs. the World. Kendrick played Stacey Pilgrim, the sister of the lead character. In 2010, Kendrick appeared in LCD Soundsystem's music video "Pow Pow" as a "shape-shifter" who collects "the souls of wicked men". In October 2010, she attended the 2010 Top Glamour Awards in Mexico where she won for "Best International Actress". In 2011, she starred in the dramatic comedy 50/50, alongside Joseph Gordon Levitt, Bryce Dallas Howard, and Seth Rogen. She also again reprised her role as Jessica Stanley in The Twilight Saga: Breaking Dawn.

In 2012, she played the part of Rosie in the screen adaptation of the baby guide, What to Expect When You're Expecting, and voiced the character Courtney in the stop-motion animated feature, ParaNorman. She starred in Pitch Perfect as Beca, a rebellious college student who discovers her voice in her school’s female a cappella group, and she is featured on the film's soundtrack. Kendrick also appeared in the police drama End of Watch, playing Janet, the wife of police officer Brian Taylor (Jake Gyllenhaal). She is set to appear in the political thriller The Company You Keep, starring Robert Redford and Shia LaBeouf.

Retrieved from "https://ahighschoolrockstar.fandom.com/wiki/Anna_Kendrick?oldid=10398"
Community content is available under CC-BY-SA unless otherwise noted.