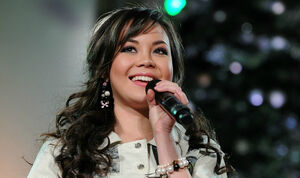 Anna María Francesca Enriquez Perez de Taglé (born December 23, 1990) is an American actress and singer. She is known for her roles as Ashley Dewitt on Hannah Montana and Ella Pador on Camp Rock and Camp Rock 2: The Final Jam. She also played Miracle Ross on Cake T.V.,[2] and was recently in the 2009 film Fame, whom she starred as Joy Moy. She also went on tour with the Jonas Brothers and Demi Lovato.(Jonas Brothers Live in Concert) In November 2011, she began starring on Broadway in the Godspell revival at the Circle in the Square theater in New York City. That is her current role. She enjoys it very much. She portrays Jennifer Mane in the series, A High School Rockstar.

Perez de Taglé was born in San Francisco, California. She is of Filipino descent. Legendary Philippines actress/singer Sylvia La Torre is her grandmother, and was an early singing coach of de Taglé's.