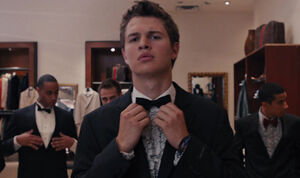 Ansel Elgort is an American actor. He played Tommy Ross in the 2013 horror film Carrie, and will co-star as Caleb Prior in the 2014 science fiction book adaptation, Divergent. He has been cast in the role of Augustus Waters in the adaptation of John Green's young adult novel The Fault in Our Stars.

Elgort was born in New York City, New York. His parents are Arthur Elgort, a photographer who has worked for Vogue, and Grethe Barrett Holby, an opera director. His father is from an Ashkenazi Jewish family, while his mother is of English, German, and Norwegian descent. He has two older siblings, Warren, a film editor, and Sophie, a photographer. At the age of nine, his mother took him to tryout for School of American Ballet.[11] Elgort attended Fiorello H. LaGuardia High School and Stagedoor Manor summer camp. Elgort started taking acting classes at the age of twelve. He starred in his high school's production of Guys and Dolls. He appeared in the Off-Broadway play, Regrets, by Matt Charman.

Elgort's acting career began through professional stage acting, in Regrets, by Matt Charman. His first on-screen role was a secondary role in the 2013 remake of Carrie. Ansel Elgort's first highly publicized role was that of Caleb in Divergent. Caleb is the brother of the protagonist, Tris, played by Shailene Woodley. The film, based on a popular Young Adult novel by Veronica Roth, is set to release on March 21, 2014.

In May of 2013, immediately after filming of Divergent was completed, it was announced that Elgort would be playing the role of Augustus Waters in the upcoming film adaptation of John Green's novel The Fault in Our Stars. He will be co-starring with actress Shailene Woodley, whom he also worked alongside in Divergent. The Fault in Our Stars follows the story of a teenage cancer patient named Hazel Grace Lancaster (played by Woodley), and her romance with Augustus Waters, Elgort's character. The film, directed by Josh Boone, is currently expected to release on June 6, 2014. Elgort has also been cast in an upcoming comedy film called Men, Women & Children, directed by Jason Reitman. The movie takes "a look at the sexual frustrations that young teenagers and adults face in today's world."