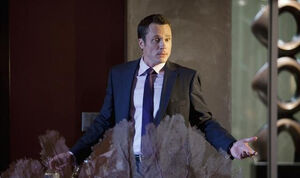 Anthony Starke is an American actor. Starke is well known for his one episode role in Seinfeld, playing the 3rd person-speaking character Jimmy in "The Jimmy", as well as playing Jack on The George Carlin Show, on Fox.

Anthony Starke attended Marquette University on the Liberace Foundation Scholarship for Performance, where he won a screen role playing quadriplegic teenager Dean Conroy in the CBS Movie of the Week, First Steps. Starke's first feature film was Nothing in Common with Jackie Gleason and Tom Hanks, playing the part of Cameron. While at Marquette, Starke worked with the Pabst Theater and the Wisconsin Shakespeare Company, appearing in a range of plays spanning classic, modern and musical. After graduating with a B.A. in Theater Arts, he took up acting full time.

Anthony Starke played Truman-Lodge in the James Bond film Licence to Kill in 1989 and a U.S. Embassy consultant in the 2007 NCIS episode "Designated Target". Starke also co-starred as the smooth-talking gambler, Ezra Standish in The Magnificent Seven between 1998 and 1999.

In 2002 he also played the role of a demon in a fourth-season episode of Charmed. In 2009, Starke had a recurring role on the ABC Family television series Make It or Break It as Steve Tanner, the rich father of one of the gymnasts from the training center 'The Rock', Lauren Tanner.