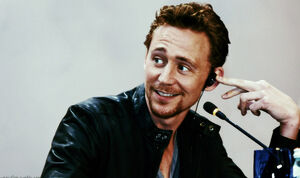 Arnold Anderson is a thief who tried destroying the music world. He is a guest star. He is portrayed by Tom Hiddleston.

Arnold Anderson is a thief whom Austin, Ally, Trish, Lexi, Dez and Aaron encountered during their spy mission in Dubai in the episode Spies & Missions. He tried stealing all the unique instruments to prevent production of the instruments until it is all extinct.

Retrieved from "https://ahighschoolrockstar.fandom.com/wiki/Arnold_Anderson?oldid=8820"
Community content is available under CC-BY-SA unless otherwise noted.