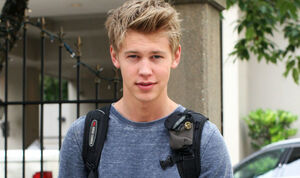 Austin Butler is an American actor, singer, and model. He is best known for his feature film role as Peyton Leverette in the High School Musical spin-off film Sharpay's Fabulous Adventure and for his role in Zoey 101 as James Garrett, who replaced Sean Flynn's character, Chase Matthews. As of June 2011, he has a recurring role on Switched at Birth, playing the role of James "Wilke" Wilkerson. He stars as Sebastian Kydd, the love interest of a young Carrie Bradshaw, played by AnnaSophia Robb on The Carrie Diaries, a prequel to Sex and the City, which premiered on The CW on January 14, 2013.

Austin Butler was born on August 17, 1991 in Anaheim, California, the son of Lori Anne (née Howell) and David Butler. He has one sibling, an older sister named Ashley (born in 1986), who worked as a background-actor alongside him on Ned's Declassified School Survival Guide.

When Butler was 13, he was approached by a representative from a background-acting management company at the Orange County Fair, who helped him get started in the entertainment industry. He found that he really enjoyed it, and soon began taking acting classes to develop his talent.

In 2005, after working as an extra on several TV shows, Butler landed his first regular job as a background actor playing the role of Lionel Scranton for two seasons on Nickelodeon's Ned's Declassified School Survival Guide. His friend on the show, Lindsey Shaw, introduced him to her manager, Pat Cutler who immediately offered to represent him, and from that point on, Butler began taking acting seriously as a career.

Two years later in 2007, after performing in several commercials, Butler landed his first movie role in the short film The Faithful playing the role of a dog, Danny, who later turns into a human being. In May of that year, Butler landed a guest starring role on the Disney Channel series Hannah Montana playing the role of Derek Hanson opposite actress Miley Cyrus, and in September of that same year, he portrayed "Jake Krandle" in the episode "iLike Jake" on the Nickelodeon series iCarly.

In February 2008, Butler landed a recurring role on the Nickelodeon show Zoey 101 playing James Garrett, the love interest of Jamie Lynn Spears's character Zoey, and in March of that year, he appeared in an episode of Out of Jimmy's Head playing the role of Lance in the episode titled "Princess".

In July 2009, Butler starred in 20th Century Fox’s family adventure movie Aliens in the Attic (originally titled They Came From Upstairs), portraying Jake Pearson, alongside Ashley Tisdale, Carter Jenkins, Robert Hoffman, Kevin Nealon and Doris Roberts. In the movie, his character, along with his family, battles to save their vacation home and the world from an alien invasion. That same summer, Butler appeared in the starring role of Jordan Gallagher on the popular, but short-lived ABC Family series Ruby & The Rockits, alongside David Cassidy, Patrick Cassidy and his good friend, Alexa Vega. Butler portrayed the cousin of Alexa's character Ruby, whom he has a crush on, reasoning that it was because he never grew up with her.

In February 2010, Butler landed a recurring role as Jones on the CW network series Life Unexpected, and that same month, he appeared in an episode of Wizards Of Waverly Place titled "Positive Alex" where he played Alex's new crush, George. In March of that year, it was announced that Butler had been cast as "Cameron" in a pilot for another CW network show called Betwixt, but the show was not picked up by the network. In June of that same year, Butler appeared in two consecutive Jonas L.A. episodes where he played Stone Stevens, and in December of that year, Butler's career took a dramatic turn when he appeared in guest-starring roles on CSI: Miami and The Defenders.

In the spring of 2010, Butler's Aliens in the Attic co-star Ashley Tisdale invited him to audition for a lead role in the film Sharpay's Fabulous Adventure, a spin-off of Disney's popular High School Musical franchise that followed the adventures of Sharpay Evans after high school as she tries to get her big break on Broadway. In the film, Butler played Peyton Leverette, a handsome student filmmaker who finds Sharpay nearly as fascinating as she finds herself.

In December 2010, Butler told Week In Rewind about landing his role in Sharpay's Fabulous Adventure - "I had worked with Ashley once, and then I heard about the movie, because she called me and said, ‘Austin, I want you to come and read for the director for this--I think you’d be perfect.’ So, I went and met with the director, and it went really well, and I ended up doing the movie." The film wrapped production in July 2010 and was released direct-to-DVD on April 19, 2011.

In the year 2011, he booked the role of Wilke on the ABC Family show Switched at Birth. He first debuted on June 27, 2011. In the same year, he signed onto play a lead role of Zack Garvey in the Lifetime movie called Bling Ring, a Dick Clark Productions and directed by Michael Lembeck who previously directed Tooth Fairy and The Santa Clause 3, follows a group of young burglars as they target the homes of some of Hollywood’s most prominent celebrities. Jennifer Grey of Dirty Dancing plays Iris Garvey, the mother of one of the defendants(Austin's character) Zack. The movie also stars Yin Chang, Renee Olstead and Spencer Locke. The movie released on September 26, 2011.

As of October 2011, Austin Butler has joined ABC Family’s hourlong pilot Intercept, a technology- and action-driven drama about four college students who get roped into solving crimes when one of them (Butler) creates a high-tech communication device that intercepts conversations throughout the West Coast. Danielle Panabaker and Chloe Wang also star in the new show. The show will be directed by Kevin Hooks, executive-produced and written by Ray Wright, who has also written hit movies like The Crazies, Case 39, and Pulse. On February 6, 2012, it was announced that the show will not be moving forward because it was not picked up.

In 2012, He guest-starred on an American comedy television called Are You There, Chelsea?, playing the role of Luke, a cute band lead singer who Laura Prepon is attracted to.

In March 2012, Austin was cast in the CW pilot the Sex and the City spin-off The Carrie Diaries to play the lead role of Sebastian Kydd, a brooding heartthrob attending the same high school as Carrie Bradshaw played by AnnaSophia Robb. The Carrie Diaries is based on a Candace Bushnell novel by the same name and will star AnnaSophia Robb as the character Sarah Jessica Parker made famous. It will follow her life in the 1980s as a teenager in NYC. On May 11, 2012 it was declared that the pilot has been picked up into series by the CW

Retrieved from "https://ahighschoolrockstar.fandom.com/wiki/Austin_Butler?oldid=8569"
Community content is available under CC-BY-SA unless otherwise noted.