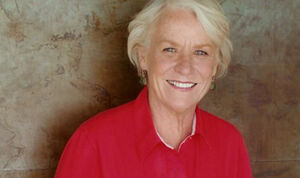 Barbara Tarbuck is an American actress born in 1942 in Detroit, Michigan. She is usually seen interpreting Lady Jane Jacks in General Hospital. She portrays the character of Mrs. Wilson.

As a child (from the ages of 9-13) Barbara Tarbuck performed as a regular for a children's series called Storyland, which aired on the AM Radio Station WWJ in Detroit, Michigan.

Barbara Tarbuck attended Cooley High School and Wayne State University. Upon winning the Eva Woodbridge Victor Scholarship and finished her Bachelors in 1963. While in college, she participated in the production of Where's Charley, which toured through Europe. She also earned her Master's Degree in Theatre from the University of Michigan. She then went to Indiana University to work as the lead actress in their inaugural theatre touring company season. She also began to work on her Ph.D. and taught beginning acting. While at Indiana University she was granted a Fulbright Scholarship to LAMDA. She then moved to New York to pursue her acting career.