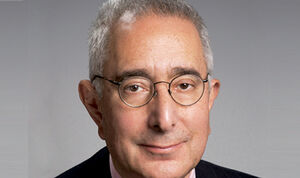 Ben Stein is an American actor, writer, lawyer, and commentator on political and economic issues. He attained early success as a speechwriter for American presidents Richard Nixon and Gerald Ford. Later, he entered the entertainment field and became an actor, comedian, and Emmy Award-winning game show host.

Stein was born in Washington, D.C., the son of Mildred (née Fishman), a homemaker, and Herbert Stein, a writer, economist, and presidential adviser. He is Jewish and grew up in the Woodside Forest neighborhood of Silver Spring, Maryland. Stein graduated from Montgomery Blair High School in 1962 along with classmate journalist Carl Bernstein; actress Goldie Hawn (class of 1963) was one year behind. Actor Sylvester Stallone was a schoolmate at Montgomery Hills Junior High School. He went on to major in economics at Columbia University's Columbia College, where he was a member of Alpha Delta Phi fraternity and the Philolexian Society. After graduating with honors from Columbia in 1966, Stein went to Yale Law School, graduating in June 1970. He says that he did not have the highest grades in his class at Yale "by a long shot," but claims to have been voted valedictorian by the students because he was the "most popular."