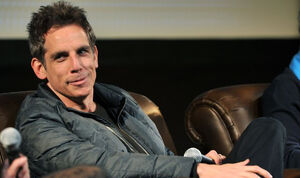 Ben Stiller is an American comedian, actor, voice actor, screenwriter, film director, and producer. He is the son of veteran comedians and actors Jerry Stiller and Anne Meara.

After beginning his acting career with a play, Stiller wrote several mockumentaries, and was offered his own show entitled The Ben Stiller Show, which he produced and hosted for its entire run: 13 episodes. Having previously acted in television, he began acting in films; he made his directorial debut with Reality Bites. Throughout his career he has written, starred in, directed, and/or produced over 50 films, including Zoolander, There's Something About Mary, Meet the Parents, Dodgeball, Tropic Thunder, the Madagascar series, Night at the Museum, and the sequel Night at the Museum: Battle of the Smithsonian. In addition, he has had multiple cameos in music videos, television shows, and films.

Stiller is a member of the comedic acting brotherhood colloquially known as the Frat Pack. His films have grossed more than $2.1 billion in Canada and the United States, with an average of $73 million per film. Throughout his career, he has received several awards and honors, including an Emmy Award, several MTV Movie Awards, and a Teen Choice Award.

Stiller was born in New York City. His father, Jerry Stiller, is from a Jewish family that immigrated from Poland and Galicia, in Eastern Europe. His mother, Anne Meara, who is of Irish Catholic background, converted to Reform Judaism after marrying his father. The family celebrated both Hanukkah and Christmas, and Stiller had a Bar Mitzvah. He has said that he is "half Jewish and half Irish Catholic." Stiller's parents frequently took him on the sets of their appearances, including The Mike Douglas Show when he was six. He stated in an interview that he considered his childhood unusual: "In some ways, it was a show-business upbringing—a lot of traveling, a lot of late nights—not what you'd call traditional." His sister, actress Amy Stiller, has made appearances in many of his productions, including Reality Bites, Dodgeball: A True Underdog Story, and Zoolander.

Stiller displayed an early interest in filmmaking, and made Super 8 movies with his sister and friends. At ten years old, he made his acting debut as a guest on his mother's television series, Kate McShane. In the late 1970s, he performed with the New York City troupe NYC's First All Children's Theater, playing several roles, including the title role in Clever Jack and the Magic Beanstalk. After being inspired by the television show Second City Television while in high school, Stiller realized that he wanted to get involved with sketch comedy.

Stiller attended the The Cathedral School of St. John the Divine and graduated from the Calhoun School in New York in 1983. He started performing on the cabaret circuit as opening act to the cabaret siren Jadin Wong. Stiller then enrolled as a film student at the University of California, Los Angeles. After nine months, Stiller left school to move back to New York City. He made his way through acting classes, auditioning and trying to find an agent.