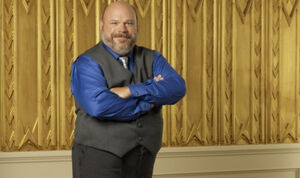 Bertram is the Ross family's butler. He is disinclined to work and quite sarcastic. He did not like it when Team Austin stayed at the penthouse as he didn't want to work, but he was not rude to them as they were guests.

Bertram is the Ross family's lazy, sarcastic butler, who seems to care very little for the kids. Even though he rarely shows it, he does have a soft side for them. He doesn't however, seem to like Jessie, though he sometimes gives her advice, not knowing his intentions and mistakens where she is from. Bertram often takes time for himself and wishes he could quit his job, but doesn't. He spends his time cleaning, reading magazines on the couch, watching TV in the screening room, and eating bacon-wrapped donuts. The Ross kids insult him sometimes when he tries to help them.

Retrieved from "https://ahighschoolrockstar.fandom.com/wiki/Bertram?oldid=8673"
Community content is available under CC-BY-SA unless otherwise noted.