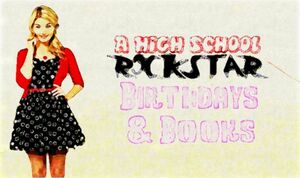 Birthdays & Books is the thirteenth episode in Season 2 of A High School Rockstar. It is scheduled to air on December 29, 2012.

The guest stars are still unknown.

Retrieved from "https://ahighschoolrockstar.fandom.com/wiki/Birthdays_%26_Books?oldid=7435"
Community content is available under CC-BY-SA unless otherwise noted.