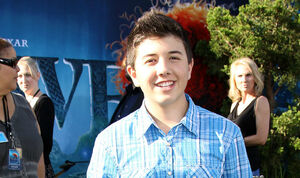 Perry was born on November 23, 1998, and lives in Southern California with his parents and three older sisters. He is homeschooled on the set of Good Luck Charlie and plays on a local baseball team in his free time. Perry is also an avid fan of the New England Patriots and appeared in an NBC Sunday Night Football television promo as "The Patriots Kid".

When he isn't busy with work and school, Perry devotes his time to various charitable causes including Mattel Children's Hospital, which provides treatment for children suffering from pediatric diseases, Toys for Tots, which is dedicated to donating toys to underprivileged children during Christmas, and the Make-a-Wish Foundation, which is dedicated to granting wishes to children with life-threatening medical conditions.

In 2007, Perry began his professional acting career at the age of 8 with small roles in the films Choose Connor, and Magnificent Max. The following year, he made his television debut with a guest-starring role on the CBS crime-drama Without a Trace. Over the next year, Perry continued to appear in small comedic roles in such films as The Goods: Live Hard, Sell Hard, Opposite Day, and Old Dogs.

In 2010, Perry landed a starring role on the Disney Channel family sitcom Good Luck Charlie. On the series, Perry plays the intelligent and scheming Gabe Duncan, the third of five siblings in the Duncan family alongside fellow Disney veterans Jason Dolley and Bridgit Mendler. In 2011, Perry landed a co-starring role in the Disney Channel original movie Sharpay's Fabulous Adventure opposite Ashley Tisdale. In the film, Perry played Roger Elliston III, a precocious young dog owner and Sharpay's rival, competing to get his dog a starring role on Broadway.