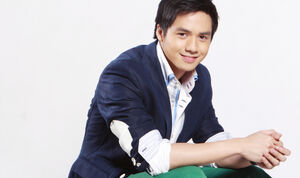 Brent is an open minded teenager who seems mature from his age. He is not shy and opens up quickly, allowing him to make friends easily. He feels comfortable with his friends, even if he don't truly know them. He appreciates some small laugh, especially from Dez and Trish. He might be too assuming, but in a good way.

He is up for anything, may it be an adventure or just a normal hang out day. He is known to have too much question, especially about the personalities of Team Austin. He has a passion for dancing, singing and oddly enough, pretending to be a ghost. He has a sense of humor, and have some weird interests. He does not want to be too attached to anyone, as his family tends to move around a lot.

He has proven to have a great singing voice when he performed a song Ally wrote for Austin, but Austin was unable to perform. Brent sometimes doubt himself but with some encouragements from his friends, he becomes more confident.

Brent arrives in the school and is helped by Team Austin to familiarize in the school. He is invited to Sonic Boom, where he officially becomes friends with the gang. After introducing himself, he is invited to Taco-Licious, where Austin will be performing. Trish offers him a taco, but passes. After the group indulges on the tacos made by Trish, they get sick, preventing Austin from performing. Brent is then asked by the gang to perform, learning the song that Ally wrote.