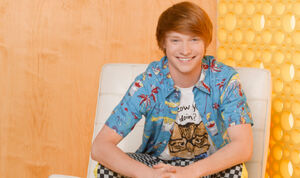 Calum Worthy is a 21 year old actor, singer, and dancer. He stars as one of the main characters, Dez, on Austin & Ally.

Worthy was born in Victoria, British Colombia. Ever since childhood, he had loved to make people laugh and smile, to entertain in general. Due to that, he decided he wanted to become an actor at the age of four, after watching Macaulay Culkin in Home Alone. A triple threat, Calum has been performing on stage as a singer, dancer and actor since the age of five. He attended Claremont Secondary School, and, at the age of nine, was accepted into Tarlington Training Professional Children's Program for three years. He studied Voice, Tap, Jazz and Piano, and won the Canadian National Young Composer’s Award (piano) when he was only eleven years old. He is great on Disney's Austin and Ally.

Calum made his screen debut at the age of nine, guest starring in Fox's Night Visions (directed by Bill Pullman). At the age of ten, he booked his first leading role, starring in the BBC six episode mini-series I Was a Rat, with Brenda Fricker, Tom Conti, Edward Fox and Don McKellar (directed by Laurie Lynd). He has since completed more than fifty different films and television projects, and has worked in five different countries – Canada, USA, Australia, England, and Singapore. Equally comfortable in dramatic and comedic roles, he has won two Young Artist Awards, and a Leo Award (Canada) for “Leading Actor” roles. Calum is currently living in Los Angeles, starring in the first season of the new Disney series Austin & Ally, with Ross Lynch, Laura Marano, and Raini Rodriguez.

These information was taken from these amazing websites:

Retrieved from "https://ahighschoolrockstar.fandom.com/wiki/Calum_Worthy?oldid=9127"
Community content is available under CC-BY-SA unless otherwise noted.