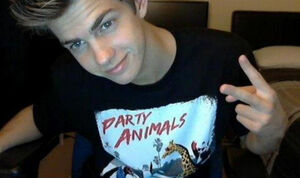 Cameron Palatas is an american actor. He portrays the character of Jasper.

Cameron Palatas has two older brothers, Nick and Phillip. Nick is also an actor and Phillip is a US Army soldier. Cameron was born in San Pedro, CA, but then moved to Newport, Rhode Island; Yokosuka, Japan; Monterey, California; and Kansas City, Missouri. His family returned to Los Angeles in 2006 when he and Nick exhibited a passion to act in television and film.

On November 13, 2008, Cameron received an award from the City of Los Angeles and Mayor Villaraigosa for his work in a public service announcement educating teens around the world on the truth about drugs and encouraging them to live healthy lives.