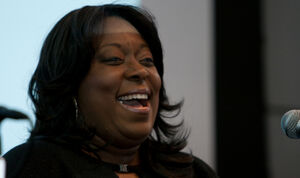 Carrie Whaler is the manager of Take-A-Bake, a store in the Mall of Miami. She is portrayed by Loni Love.

Carrie is a strict manager of Take-A-Bake shop. She doesn't want relationships between her employees to get in the way of their work, as seen in Jobs & Jokes. Her name is often mistaken as just Whale, instead of Whaler. She doesn't find it very offensive, but she wants her employees to get her name right. She can also be lazy at times, when he ordered Austin & Ally to clean up the store before she fires them.