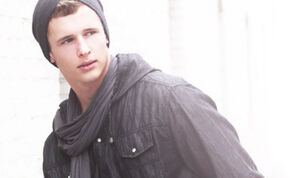 Cayden Boyd is an American teen actor. He is best known for his main character role as Max in the Robert Rodriguez's film The Adventures of Sharkboy and Lavagirl in 3-D.

Boyd was born in Bedford, Texas but has relocated to Los Angeles with his parents and older sister, actress Jenna Boyd. He plays violin and cello, is on a football team. He is also a proud Christian.

Boyd landed his first roles, small television roles and commercials, as young as 6 and 7. He played Tim Robbins's son in Mystic River. In 2005, he played Max in The Adventures of Sharkboy and Lavagirl in 3-D. Most recently, he played young Warren Worthington III in X-Men: The Last Stand, and he had a starring role in Have Dreams, Will Travel (2007). He appeared on episodes of such television series as Crossing Jordan, Cold Case, Close to Home and Scrubs. In 2008, he appeared alongside Julia Roberts and Willem Dafoe in Fireflies in the Garden.