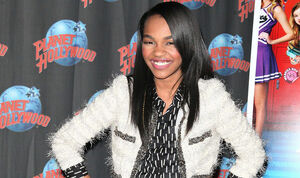 China Anne McClain is an American teen actress, singer, and songwriter. Her father and mother are singer producers. She has two sisters, Sierra and Lauryn, forming the group McClain Sisters. As of August 2011, China has amassed more than $600,000 throughout her career. China's career began in 2005 when she was seven years old acting in the movie The Gospel. However, she became nationally known after 2007, when she joined the cast of the series Tyler Perry's House of Payne as Jazmine Payne, and internationally as Chyna Parks, the star of the Disney Channel television series A.N.T. Farm.

Disney released the soundtrack of the television series ANT Farm on October 11, 2011. McClain sings six songs and two solos with her sisters on the soundtrack, which debuted in the Billboard 200 at number 29 with 14,000 copies sold in its first week. The release containing the hit song Calling All the Monsters that reached the eighty-sixth spot on the Billboard Hot 100. There are plans to release an album with her siblings in Early 2013 published by Hollywood Records under the moniker The McClain Sisters.

McClain was discovered in 2005 by a music executive who heard her sing and encouraged director Rob Hardy to audition her for his 2005 feature film The Gospel alongside Boris Kodjoe and Idris Elba. Her role caught the attention of Tyler Perry, who cast her as Jazmine Payne in the television series Tyler Perry's House of Payne.

She appears in the movie Daddy's Little Girls with her real-life sisters, Sierra and Lauryn who are also actresses, play her older sisters in the film. Her father, Michael McClain, is a music producer. Her mother, Shontell, is a songwriter. McClain appeared in and guest starred in various other shows and movies such as Hannah Montana with Sierra McCormick, NCIS and the 2009 film Hurricane Season. Jonas L.A. was also a Disney Channel shows she was on. She also appeared in the movie Grown Ups as Charlotte McKenzie. In the same year when she landed a recurring role.

McClain appeared on the Disney Channel series Wizards of Waverly Place in 2011 as Tina in one episode entitled "Wizards vs. Angels". In 2011, McClain was cast as the lead role in the Disney Channel series A.N.T. Farm with Sierra McCormick from Hannah Montana and Jake Short, along with Carlon Jeffery, and Stefanie Scott. For the show, McClain recorded a cover of Taio Cruz's "Dynamite". She also sings the series theme song, "Exceptional". China Anne's first music video, for "Dynamite", premiered on July 23, 2011 on Disney Channel. After less than a week, more than 1 million views on YouTube were reported. She has appeared in an episode of PrankStars. She also appeared in the Chiddy Bang Opposite Of Adults music video. For the Disney Channel Halloween special in 2011, she performed the song, "Calling All The Monsters".

As of June 14, 2011 the McClain Sisters was signed with Hollywood Records. The A.N.T. Farm soundtrack was released on October 11, 2011, featuring China Anne's version of "Dynamite" by Taio Cruz. On September 28, 2011, China Anne released "Calling All The Monsters" to iTunes. "Calling All The Monsters" charted number 100 on the Billboard Hot 100 chart. On November 24, 2011, China performed her song "Unstoppable" in the 85th Macy's Thanksgiving Parade.

McClain was born in Atlanta, Georgia. She currently resides in Los Angeles, California with her family.

Retrieved from "https://ahighschoolrockstar.fandom.com/wiki/China_Anne_McClain?oldid=7636"
Community content is available under CC-BY-SA unless otherwise noted.