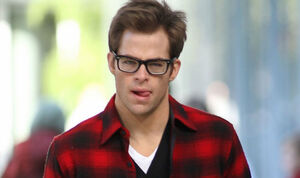 Pine was born in Los Angeles, California. His father, Robert Pine, is an actor who appeared in CHiPs as Sergeant Joseph Getraer, and his mother, Gwynne Gilford, is a former actress who is now a practicing psychotherapist. He has an older sister, Katie. His maternal grandmother, Anne Gwynne (née Marguerite Gwynne Trice), was a Hollywood actress, and his maternal grandfather, Max M. Gilford (born Max Goldfarb), was an attorney who was elected president of the Hollywood Bar Association. Pine's ancestry includes Russian Jewish (from his maternal grandfather), Welsh, and English. He has stated, "I definitely have a spiritual outlook... I am not a religious guy, I am probably agnostic".

Pine attended Oakwood School for high school and received a bachelor's degree in English from the University of California, Berkeley, in 2002. He also studied English at the University of Leeds in the United Kingdom for one year. After graduation, he studied at the American Conservatory Theater in San Francisco.

Pine's first professional role was in a 2003 episode of ER; the same year, he also appeared in episodes of The Guardian and CSI: Miami. In 2004, he appeared in Why Germany?, a short film, and in The Princess Diaries 2: Royal Engagement. Pine played the part of Nicholas Devereaux, the love interest of Anne Hathaway's character in the film, which was released in August of that year to a strong box office. In 2005, Pine appeared in an episode of the series Six Feet Under, as well as in Confession, an independent film that was released directly to video, and The Bulls, another short film.

Pine appeared in the made-for-television film Surrender, Dorothy which aired in early 2006. He also played Jake Hardin in the American film Just My Luck, a romantic comedy in which he starred opposite Lindsay Lohan, who played Ashley Albright. The film was released on May 12, 2006. Later that year, Pine appeared in the comedy Blind Dating and in the action film Smokin' Aces. In 2007, he starred opposite Scott Wolf in the Los Angeles production of Neil LaBute's play Fat Pig, winning positive reviews for his depiction of a competitive, alpha-male friend. He portrayed real-life Napa Valley vintner Bo Barrett in the 2008 film Bottle Shock.

In 2007, Pine turned down a role in a film adaptation of White Jazz, to accept the part of James T. Kirk in the 2009 Star Trek film, which was released to critical and viewer acclaim in May of that year. That same month, he made a brief appearance promoting the film on Saturday Night Live, with co-stars Zachary Quinto and Leonard Nimoy. During the rest of summer 2009, he appeared in the Los Angeles production of the Beau Willimon play Farragut North. In September 2009, his film Carriers was released (having been filmed in 2007). His other 2009 roles included Quantum Quest: A Cassini Space Odyssey (voice work only) and the independent film Small Town Saturday Night. Pine appeared in the Los Angeles production of the black comedy The Lieutenant of Inishmore during the summer of 2010, for which he won the LA Drama Critics Circle Award, and at the MTV VMAs on September 12, 2010.

Pine was rumored to play the title role in the 2011 Green Lantern film, but the role eventually went to Ryan Reynolds. In the fall of 2009, Pine began filming the Tony Scott-directed and Mark Bomback-written action film Unstoppable, which was released in November 2010. In the film, he played a young train conductor who helped a veteran railroad engineer (Denzel Washington) stop an unmanned, half-mile-long runaway freight train carrying toxic liquids and poisonous gases from wiping out a nearby city. The Hollywood Reporter named Pine as one of the young male actors who are "pushing – or being pushed" into taking over Hollywood as the new "A-List".

In 2011, Pine sat down with the original Captain Kirk, William Shatner, for the feature length documentary The Captains, which Shatner wrote and directed. The film sees Shatner interview Pine about his career and how it felt to take the role of Captain Kirk for the 2009 movie. Their interview features a memorable moment where the pair arm wrestles, pictures of this incident "went viral" leading to internet headlines such as "Kirk V Kirk" and others.