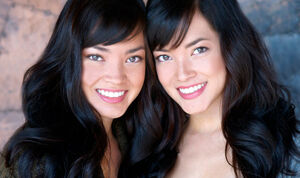 Katie & Kellie Cockrell are american actresses. They are twins, born and raised in Salt Lake City, Utah. They portray the characters of Chelsea & Charlie.

Katie and her twin sister, Kellie, were born and raised in Salt Lake City, Utah. They developed their love for performing early, at five years old they begged their mom to put them in dance classes. They excelled quickly; when they were nine they danced with Ballet West in The Nutcracker. They continued dancing with Ballet West's seasonal production for four years in a row and were even invited to perform at in their annual spring show, A Midsummer Night's Dream. Their first acting break came when the two were 17. They booked the parts of the evil Sinister Sisters in the Disney Channel Original Movie, Return to Halloweentown. Once the acting bug bit, Katie and Kellie were hooked. Determined to master their craft; Katie and Kellie studied at Shakespeare at the prestigious London Academy of Music and Dramatic Art (LAMDA). They are continually studying acting, taking from some of the best teachers in Los Angeles. As of May 2010, they have been studying under Gregory Berger-Sobeck, Yale School of Drama.

Katie and Kellie have appeared in over 30 commercials; in both national and regional markets. Some of the highlights include: Sara Lee Bread for High School Musical 3, 2010 MTV Video Music Awards for Sony, Dance for Broadway (Playstation Game), and Mountain America Credit Union (which ran regionally during the 2011 Super Bowl.)