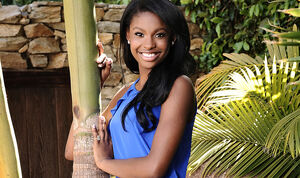 Coco Jones s an American teen actress, teen pop singer, rapper, and dancer. She was born in Columbia, South Carolina, but raised in Lebanon, Tennessee. She was featured on Radio Disney's Next Big Thing, or N.B.T., and is best known for starring in the Disney Channel movie Let It Shine. Signed to Hollywood Records, Jones released her debut single "Holla at the DJ," followed by her EP, "Made Of"

Raised in Lebanon, Tennessee to former NFL player Mike Jones and session vocalist Javonda Jones, Jones began singing at a very young age. Her first stage performance was at the age of six when she performed "America the Beautiful" to a crowded auditorium of parents at her kindergarten graduation. At the age of nine, she met with the casting heads for Disney. After that, she became an actor and songwriter. In 2005, Jones performed the National Anthem at two NFL games. She has worked with the Motown group, The Funk Brothers. In 2009, she was chosen to perform live on "The Most Talented Kids" episode of the Maury Povich Show.

Her self-titled debut CD, Coco Jones, was released in 2010, which led to her concert series, UBU-STOP THE BULLYING; her songs embraced a platform of positive values and strong self-esteem. In 2010, she competed on Radio Disney's The Next BIG Thing, where she became known for her song "Real You". Being on N.B.T was a step in helping her to further launch her music career. As of 2011, she has guest starred on the Disney Channel's So Random!. In 2012, she performed at the 2012 NAACP Awards Nominees Luncheon, and has concerts scheduled throughout the year. Jones is showcased as the youngest artist on the recently released Bleve Records compilation CD, My First Ride, benefiting the Fireman’s Fund for Disaster Relief. Her rendition of Aretha Franklin’s "Chain, Chain, Chain”, accompanied by the Motown group The Funk Brothers, is a stand-out track on the CD. She is best known for the film Let It Shine, where Jones played the role of “Roxie,” a little teenage sensation, whose music label is sponsoring a songwriting contest at a teen club. "Cyrus DeBarge" (Williams), by the artist name of "Truth", writes a contest-winning song about his love for Roxie, but when he’s too shy to claim it as his own, his best friend, “Kris McDuffy” (Jackson) takes the credit, thus kicking off a melodramatic story of accomplishment. Based on French play Cyrano de Bergerac, Let It Shine tells the story of young love, boasting a message of self-confidence. The movie was the most watched DCOM and most watched movie of the year for kids and tweens in 2012.

Her song "Real You" has been featured on-air on Radio Disney. It is also available online at Radio Disney, along with her song "U B U." She has been featured on the Shake It Up: Live 2 Dance soundtrack for the TV series Shake It Up, performing the song "Don't Push Me", a feisty danced themed song, and "Whodunit" an upbeat dance song featuring Adam Hicks. Jones is featured on the Let It Shine soundtrack in songs including "Guardian Angel", "Me and You", "What I Said", "Who I'm Gonna Be", "Good to Be Home", and "Let It Shine." She also contributes on two tracks that feature the entire cast of Let It Shine, "Around The Block" and "Joyful Noise".