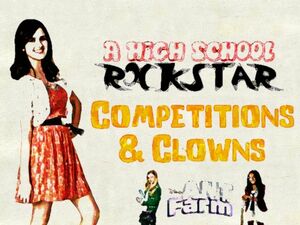 Competitions & Clowns is the sixteenth episode in Season 2 of A High School Rockstar.It was scheduled air on February 9, 2013, but it was released on February 16, 2013 together with the Valentine's Day Episode, Valentines & Vaults. It is a crossover episode with A.N.T. Farm.

Team Austin travels to San Francisco to audition for America Needs Talent. Lexi Reed reunites with her friends from San Francisco and encourages Austin and Chyna to team up. Meanwhile, Tyler, who is afraid of clowns, freaks out when he finds out that the Clown Pranks Show shoots in San Francisco and thinks that he might be the next to be pranked.

Retrieved from "https://ahighschoolrockstar.fandom.com/wiki/Competitions_%26_Clowns?oldid=9649"
Community content is available under CC-BY-SA unless otherwise noted.