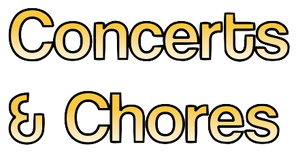 Concerts & Chores is the eighteenth episode in Season 1 of A High School Rockstar. It aired on August 24, 2012.

After hearing Austin Moon perform, Tyler's mom, Kathryn Fox offers him to do a concert for their company. It's an opportunity for him to be discovered, but there's something holding him back. He has to do household chores. Because of a party he threw, Austin's father, Mike Moon, assigns him to do all the chores in the house in order to join the concert, but Austin can't handle all the chores by himself.

Retrieved from "https://ahighschoolrockstar.fandom.com/wiki/Concerts_%26_Chores?oldid=7288"
Community content is available under CC-BY-SA unless otherwise noted.