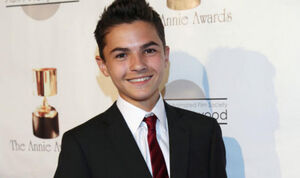 Connor Frank is an 14-year old kid who lives in Miami. He is portrayed by Logan Grove.

Logan is a big fan of Austin. He can sometimes be a mischievous kid, often walking far from his dad. He can sometimes have a big mouth, saying things that he should keep to himself. He also loves having grand entrances, especially when entering Sonic Boom. He usually enters with a small vehicle like a scooter with all sorts of surprises.

He often passes his responsibility to his dad, since he is just a kid. He is offered by Ally to be a music student, which shows that he might have some musical talent. He is determined to be a close friend with his idol, Austin. Connor is also seen as the young child, but he always insists that he can be responsible and can handle himself perfectly. He tries to attract girls that is a two or three years older than him.

He is very confident, and is very similar to Zac. He always reminds everyone around him that he is older than he looks. He tries to be cool especially around the ladies. He seems to have a musical talent, as seen in "Puzzles & Planes" when he sings a part of "Don't Look Down" after Austin and Ally performs it. He is said to be the next possible Austin Moon.

Retrieved from "https://ahighschoolrockstar.fandom.com/wiki/Connor_Frank?oldid=8548"
Community content is available under CC-BY-SA unless otherwise noted.