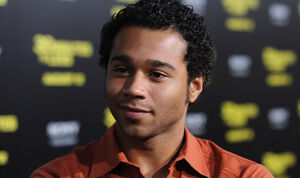 Corbin Bleu is an American actor, model, dancer, producer, and singer-songwriter. He performed in the High School Musical film series, the Discovery Kids drama series Flight 29 Down, and the Disney Channel Original Movie Jump In!. His first lead role was in the film Catch That Kid (2004).

Bleu was born in Brooklyn, New York City, the son of Martha (née Callari) and David Reivers. His mother is Italian American and his father is Jamaican American. He has three sisters: Jag, Phoenix, and Hunter. As a child, Bleu studied dance for several years, focusing on ballet and jazz.

Bleu appeared in television commercials starting at the age two, for products such as Life cereal, Bounty, Hasbro, and Nabisco. He began taking jazz and ballet classes, usually being the only boy in the class. By the age of four he was a model with the Ford Modeling Agency in New York. He appeared in print ads for stores such as Macy's, Gap, Target, and Toys R Us, and appeared in fashion spreads in Child, Parents, and American Baby magazines, as well as having his image on toys and game packaging. At age six Corbin appeared in his first professional theater production off Broadway, at The Town Hall. This three-concert series, created, written, and hosted by Scott Siegel, took place over one weekend and included a tribute to David Merrick. Corbin Bleu played an abandoned homeless mute in the play Tiny Tim is Dead.

Bleu graduated from Los Angeles County High School for the Arts. He trained in dancing at the Debbie Allen Dance Academy. He attended the High School of Performing Arts in New York as a theater major, following in his mother's footsteps.

In 1996 Bleu's family relocated to Los Angeles, and he soon gained a recurring role on the TV series High Incident and a guest star appearance on ER. Bleu also had roles in Malcolm & Eddie (1998), as Matthew, and Cover Me: Based on the True Life of an FBI Family (2000), as Nick Elderby. He also had small roles in films like Soldier, Family Tree, Mystery Men, Galaxy Quest, and The Amanda Show.

Corbin continued dancing, becoming one of the first students at the Debbie Allen Dance Academy. While in his first year Corbin was cast in his first lead role in the feature film 2004 film, Catch That Kid, alongside Kristen Stewart and Max Thieriot. In his second year, he played the lead role of Ren in the musical "Footloose" and the role of Sonny in the musical "Grease". That same year Corbin won Theatre Student of the Year.

In the summer of 2004 Corbin became a part of the ensemble cast for the new Discovery Kids television series Flight 29 Down as Nathan McHugh, alongside Allen Alvarado and Hallee Hirsh and Lauren Storm, a drama series about a group of teens stranded on a deserted island after a plane crash. He also had a small role as Spencer on Ned's Declassified School Survival Guide, appearing in the episodes entitled Guide to: The School Play and Guide to: Revenge & School Records. and Mother Goose Parade as Grand Marshall in 2006 and 2007.

In fall 2009, he had a lead role in the film Free Style as Cale Bryant, and appeared in The CW Television Network's new show The Beautiful Life: TBL. Also in 2009, he is Voice in Beyond All Boundaries, and appeared on Entertainment Tonight and The Morning Show with Mike and Juliet. He landed the lead role in the Broadway Musical In the Heights, and guest starred in one episode of The Good Wife as DJ Javier Berlin in October 2010.

Corbin starred in the short comedy film I Owe My Life to Corbin Bleu in 2010. In 2011, he performed the voice Lou in The Little Engine That Could, starred in the horror film Scary or Die, and started filming Renee, which will be released in 2012. In 2012, he returned to Broadway in the revival of Godspell. In March 2013, Bleu was cast in the role of Jeffrey King on the Prospect Park web relaunch of the daytime soap opera, One Life to Live. Bleu also has a role in the upcoming horror film The Monkey's Paw.