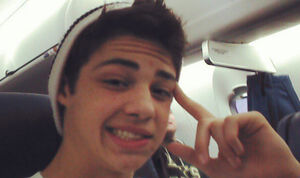 Dallas is the cellphone accessory guy who now works at the library. He is somewhat close friends with Ally & Trish being that they work in the same mall. On the second season of A High School Rockstar, Dallas is downgraded from a recurring character to a minor character.

Dallas is a kind friend, but sometimes an airhead. Ally used him as a loophole. Dallas actually liked Ally beforehand. Ally didn't actually like him, just to make sure that Austin doesn't find out about her real secret crush before. Dallas, like Ally, can't dance. He hates yogurt just like Trish. In a later episode, Dallas finds that he has a lot in common with Trish and possibly has feelings for her.

Retrieved from "https://ahighschoolrockstar.fandom.com/wiki/Dallas?oldid=7679"
Community content is available under CC-BY-SA unless otherwise noted.