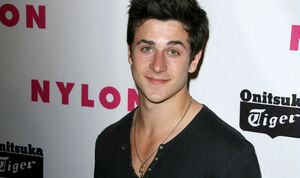 David Henrie s an American actor, television writer, and producer. He is noted for playing Ted Mosby's future son on How I Met Your Mother, Justin Russo in Wizards of Waverly Place and Larry on That's So Raven. He is the elder brother of the actor Lorenzo Henrie.

Henrie was born in Mission Viejo, California, the son of Linda (née Finocchiaro), a talent manager, and James Wilson Henrie, a producer formerly in real estate. He is the brother of actor Lorenzo Henrie. His maternal grandparents were Italian. Henrie was raised as a Roman Catholic, and, in a video chat, stated that he is "a Christian and always will be." He grew up in Phoenix, Arizona, and is an avid hockey fan.

By age 13, Henrie got his first big break, landing a regular role as Petey Pitt on the Fox sitcom The Pitts. Henrie next landed a leading role in the Hallmark movie, Monster Makers, with Linda Blair and George Kennedy, and was asked to come back for another Hallmark movie, to play a role in Dead Hollywood Moms Society.

Due to his involvement with Disney Channel, Henrie competed in the 2008 Disney Channel Games. He was team captain of the Green Team, also known as the Cyclones. He has a role in the Disney Channel Original Movie Dadnapped. Before his role on Wizards of Waverly Place, he had a recurring role on That's So Raven as Cory's friend Larry. Henrie also has a recurring role on How I Met Your Mother, and made a guest appearance as himself in 2 episodes of Jonas L.A.. According to Reuters, Henrie was officially named the Grand Marshal for the 2009 Toyota Pro/Celebrity Race.

Henrie is credited with writing the special, Meet The Werewolves. Henrie has also directed a short film titled "Boo!". Henrie is currently filming a movie Little Boy and plays the role of London Busbee. He is also part of the cast of Grown Ups 2 opposite Taylor Lautner and Adam Sandler.

On April 6, 2012, which coincides with Good Friday, Henrie accompanied Eduardo Verástegui in a speech addressing life issues at the Church of the Most Blessed Sacrament in the city of Piura.