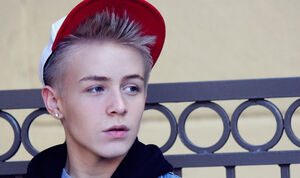 Devin Fox is an american actor and singer. He portrays Dean.

Devin found his voice about two years ago but has only been serious about singing for about a year. He has taken voice lessons for a year and a half and has just started piano lessons three months ago.

Devin has competed in a few local talent competitions and won prizes such as recording time in a studio and a spot to perform at the Michigan State Fair. In addition to singing, Devin loves to act and do musical theater. His favorite roles so far are Grandpa Joe in Willie Wonka and Rooster Hannigan in Annie Jr. Devin also likes to draw and has been enrolled in an art class for about a year. He also likes movie editing and photography.