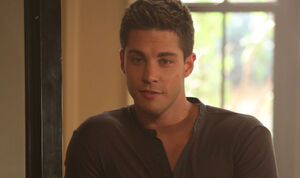 Devon Frank is Logan's father. He is portrayed by Dean Geyer and made its first appearance in the episode, World Tours & Wars.

Devon is a typical father, except he is younger than most of the dads. He seems to have a good relationship with his son, although his son feels like he does not need to be taken care of. He is very caring and treats his son like a baby, which may be because he is his only son. Devon also has a strict side as any loving parent is. He always brings Connor to wherever he goes and they do a lot of things together.

Devon has a good job, considering all the expensive things and toys that he provides for Logan. He is a single parent and may currently be looking for a date. He doesn't like it when his son does big entrances, but does not punish him for it.