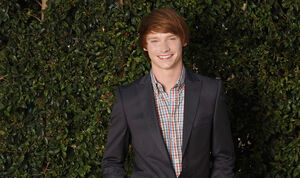 Dezmond "Dez" is a 24-year old aspiring director filmaker. He is Austin's best friend and the one who made his video that made him an overnight internet sensation. His videos often does good to Austin's career and also helps them in times of trouble. He is portrayed by Calum Worthy

Dez is a funny, random, and quirky guy. He is Austin’s best friend and he also directs Austin's music videos. His weird habit of pulling anything and everything out of his backpack (like a ham or a turtle) amuses his friends. He sometimes tend to be childish, but in the same way has a smart side, especially in art. He reveals his talents later in the series.

When Dez notices that Austin has feelings for Ally, he confronts him. At the mall food court, Dez accidentally turns on Austin's microphone while he is confessing his love to Ally. The whole mall heard their conversation.

When Dez and Trish were left in charge with the store, they play Truth or Dare. Trish tricks him into cleaning up the store but he gets his revenge after Trish makes a mess of the store.

Retrieved from "https://ahighschoolrockstar.fandom.com/wiki/Dezmond_%22Dez%22?oldid=9682"
Community content is available under CC-BY-SA unless otherwise noted.