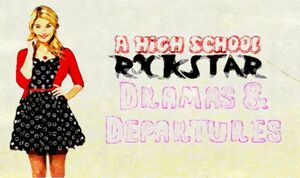 Dramas & Departures is the twenty-seventh episode in Season 2 of A High School Rockstar. It aired on June 29, 2013. It is the finale episode of Season 2.

After a shocking discovery about his parents, Aaron is determined to leave Miami to find out what really happened. This leads to Lexi having to decide if he should break up with him or not. Then, Austin finds out that Aaron might never come back and tries to stop his departure. Will this be his last time with his brother?

In the beginning of this episode, Ally is at Miami Medical Centre with Lexi and Tyler. Ally is sitting by the bedside of an unrevealed character while she rests on her arms. The heart rate monitor then beeps and shows a flat line, and the three are awaken. They call for the doctor and the doctor tries everything to help revive the patient. Ally and Lexi then breaks down crying while Tyler confronts the two of them.

The scene cuts to the "One Week Earlier" from the incident. Team Austin together with Penny, Lester, Zac, Brian and Samantha are at Sonic Boom, preparing for the summer. Harvey and Scarlett then surprises them with a big news that they have been accepted into the Nature Expedition, which means that they won't be staying in Miami. More news comes when Jennifer announces that her parents are moving to Paris with her and Brent is moving to Seattle with his family.

They plan a going away party for the four of them. Connor then appears out of nowhere when he dropped a smoke bomb, another one of his entrances. Aaron excuses himself as he gets a phone call. At the same time, Zac and the others left to prepare for the going away party. Aaron then goes back in the store with a shocked expression, before announcing that he may have found his parents.

Mike and Mimi rushes down to Sonic Boom to confront Aaron and talk about his plans, but Aaron revealed that his parents have been dead for fourteen years. He also revealed that his biological parents' last name was the same as Mimi's last name, Jacobs. They try to convince him that it is just a coincidence but Aaron does not believe it. He rushes home to pack and buy a ticket to the first flight to San Francisco.

Mike and Mimi fails to explain to him about the coincidence so their attempt to prevent him from leaving was futile. They then ask Austin and his friends' help to convince him to stay. Team Austin then follows him to Miami International Airport where Aaron finally breaks his relationship with Lexi. Lexi runs in despair. Austin is then involved in a car accident where he battles for his life.

The scene goes back to when Ally, Lexi and Tyler at the hospital, revealing that Austin was the one in the hospital bed. The doctors tries to revive him but fails to. Aaron then appears and tries to revive him and after a minute of silence, Austin comes back to life. A week later, Austin comes home and Ally and the others throws a welcome back party, which also served as the going away party. They say their last goodbyes to Brent, Jennifer, Harvey and Scarlett.

Aaron and Lexi talks about the incident that happened and agreed to stay close friends. Aaron also revealed that Lexi somehow saved Austin as when Lexi dropped her phone back at the Airport, Aaron saw it and sees Ally's text about Austin's accident. The episode ends with Aaron and Lexi hugging and Team Austin continuing their celebration.

Retrieved from "https://ahighschoolrockstar.fandom.com/wiki/Dramas_%26_Departures?oldid=9661"
Community content is available under CC-BY-SA unless otherwise noted.