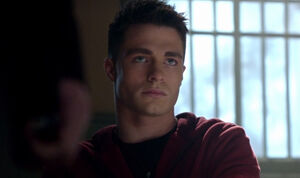 Dylan Grant is a recurring character in Season 3 of A High School Rockstar. He is portrayed by Colton Haynes.

Dylan is the new kid in Miami Senior High, who moved from Los Angeles. His parents are both Scientists. Dylan is considered the most popular guy in school. He is considered the bad boy, which may not be as true. He adapts to new environments easily, as he managed to be popular in school even if he was new. He is a troublemaker and does not pay attention in class. He is great with the ladies, as Dean described, even getting Amber to be his girlfriend. Dylan uses sarcasm with teachers to annoy them.

He has a lack of interest in school, which makes him skip when he has the chance, like when the jaguar got loose. He often drags people with him when he does things. At the end of the episode, it is revealed that beyond Dylan's bad boy reputation, he has a warm and good side. His sister, Miley Grant, told Austin that Dylan was a big fan of Austin. He ends up befriending Team Austin. According to Miley, Dylan likes to put stuff in cages. Dylan does not take note of what he needs to do and is constantly reminded of it, like going to the doctors. He doesn't want to the doctor with his sister as it could show something about his soft side.

Retrieved from "https://ahighschoolrockstar.fandom.com/wiki/Dylan_Grant?oldid=9370"
Community content is available under CC-BY-SA unless otherwise noted.