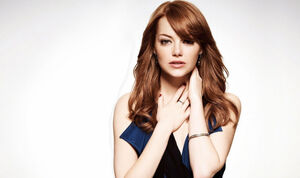 Emma Stone is an American actress. Stone was a cast member of the TV series Drive, and made her feature film debut in the comedy Superbad (2007). She has appeared in The House Bunny (2008), Ghosts of Girlfriends Past (2009), Zombieland (2009), and Paper Man (2009). In 2010, Stone voiced the character Mazie in Marmaduke, and starred in the comedy Easy A for which she received a nomination for the Golden Globe Award for Best Actress – Motion Picture Musical or Comedy. In 2011, she appeared in Crazy, Stupid, Love. and starred in The Help. In 2012, Stone played Gwen Stacy in The Amazing Spider-Man, a reboot of the Spider-Man film series. In 2013, she starred in Gangster Squad, and will voice the character of Eep in the animated film The Croods. Stone is set to reprise her role of Gwen Stacy in The Amazing Spider-Man 2 in 2014.

Stone was born in Scottsdale, Arizona, the daughter of Krista (née Yeager), a homemaker, and Jeff Stone, a contractor. She has a brother, Spencer, who is two years younger. Stone's paternal grandfather was of Swedish descent, and his family's surname was anglicized to "Stone" when immigrating to the U.S. through Ellis Island; some of her ancestors also lived in Pennsylvania Dutch Country.

While growing up, she was a member of the Valley Youth Theatre, a regional theater in Phoenix, Arizona, where she appeared in her first stage production, The Wind in the Willows, at the age of eleven. Stone attended Sequoya Elementary School and then Cocopah Middle School for sixth grade. She was home schooled for two years, during which time she appeared in sixteen productions at Valley Youth Theatre, including: A Winnie-the-Pooh Christmas Tail, The Princess and the Pea, Cinderella, The Wiz, Titanic, Honk!, The Little Mermaid, Schoolhouse Rock Live!, Alice in Wonderland, and Joseph and the Amazing Technicolor Dreamcoat, and performed with the theater's improv comedy troupe.

Stone attended Xavier College Preparatory, an all-girl Catholic high school, as a freshman for one semester. She gave a PowerPoint presentation to her parents, set to the Madonna song "Hollywood", to convince them to let her move to California for an acting career. She dropped out of high school, and in January 2004, moved with her mother to a Los Angeles apartment, at the age of fifteen. She was then home schooled, so that she could audition during the day.

Stone joined the voice cast of The Croods, a 3D computer animated caveman comedy by DreamWorks Animation. She will voice the role of Eep, the oldest daughter of Grug (Nicolas Cage) and Ugga (Catherine Keener). Ryan Reynolds voices Gy, the love interest to Stone's character. The film is scheduled for release on March 22, 2013. She starred in the comedic short film, "Veronica", alongside Kieran Culkin. The short, directed by Griffin Dunne, is a comedy segment that is part of the anthology film, Movie 43, featuring Kate Winslet, Gerard Butler, Hugh Jackman, Uma Thurman, Halle Berry, and others. The feature film was produced by the Farrelly brothers.

Stone starred as the female lead opposite Andrew Garfield in The Amazing Spider-Man, a reboot by Columbia Pictures and Marvel Entertainment, of the Spider-Man film series. She played Gwen Stacy, the seventeen-year-old love interest of Peter Parker. Marc Webb directed the film, which was released on July 3, 2012. The film went into production in December 2010, lasting through April 2011. Stone was considered for the lead in a reboot of 21 Jump Street, alongside Superbad co-star Jonah Hill. She did not take the role however, after signing on to Spider-Man.

Stone co-starred in Gangster Squad, a film by Zombieland director Ruben Fleischer. She was reunited with Ryan Gosling in the ensemble crime drama, which also starred Sean Penn, Josh Brolin, Anthony Mackie, Giovanni Ribisi, and Michael Peña. Stone played Grace, who is caught in a love triangle with Gosling's character, Sgt. Jerry Wooters and Penn's character, mobster Mickey Cohen. The film was released on January 11, 2013 in North America. Stone will be reunited with writer and director Will Gluck, starring in and executive producing an untitled comedy for Screen Gems. The film studio has given Gluck and Stone full discretion in developing a new project, after the success of Easy A.

As of January 2012, she was attached to a script, Little White Corvette, a comedy about a pair of would-be drug dealing siblings. The project was expected to film in Miami in mid-2012. In mid-2012, Stone voiced a supporting role in the crime-based video game, Sleeping Dogs. She signed on to star in an untitled love story feature from Academy Award winner Cameron Crowe, for Sony Pictures. Stone will also reprise her role as Gwen Stacy in The Amazing Spider-Man 2, which is scheduled for release on May 2, 2014. In January 2013, Stone was in talks to star in Guillermo del Toro's horror film Crimson Peak alongside Charlie Hunnam. The film is a gothic romance set in a haunted house.

Retrieved from "https://ahighschoolrockstar.fandom.com/wiki/Emma_Stone?oldid=9058"
Community content is available under CC-BY-SA unless otherwise noted.