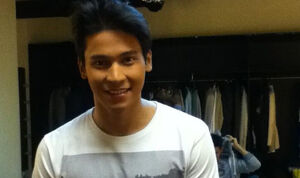 Enchong Dee is a Filipino actor, model, and swimmer. Dee is currently part of ABS-CBN's Star Magic group of contract artists. He played John Joseph "Jojo" Wenceslao in the 2009 TV series Katorse. He also plays the role of "Luis" in Maria Del Barrio. He's currently appearing on Ina, Kapatid, Anak as "Ethan". He is the younger brother of actor and model, AJ Dee.

Enchong Dee was born in Naga City, Camarines Sur. He has two brothers, Angel James Dee, who is also an actor, while his younger brother, Isiah Dee, is a student in De La Salle University Manila- College of St. Benilde. Enchong also has a younger sister. Graduated from Naga Hope Christian School. He further pursued his swimming career at De La Salle University in Manila. Dee was part of the Philippine national swimming team and has participated in the SEA Games and 2006 Asian Games.

Dee's first TV appearance in television came in 2006 when he appeared in a Philippine talk show Home Boy as one of the guests. He caught the eye of a modeling agency and advertisers and soon appeared in several advertising campaigns including Close Up, Bench, KFC and Timex. Dee landed several acting roles beginning in 2007 which have included Abt Ur Luv, Sineserye, Komiks, Your Song and My Girl. In 2009, he was added to the main cast of Katorse, an adaptation of the 1968 film (that was also remade in 1981).

In 2010, he then reunited with some of his co-stars, Erich Gonzales and Ejay Falcon, in Tanging Yaman. He then became part of Magkaribal. He starred in the film, Sa 'yo Lamang where he gained award nominations and won the Gawad PASADO for Best Supporting Actor. Enchong gained his first movie lead role, alongside his premiere leading lady, Erich Gonzales, in I Do. In 2011, he starred in the Philippines' remake of Maria La Del Barrio as Luis de la Vega. He recently appeared in the 2012 film, The Reunion, with Enrique Gil, Xian Lim and Kean Cipriano. Enchong won the one-million pesos briefcase in the August 18, 2012 episode of "Kapamilya Deal Or No Deal" together with his "The Reunion" co-star Kean Cipriano.