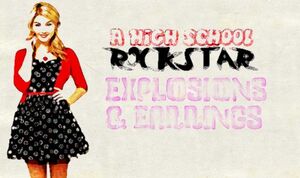 Explosions & Earrings is the twentieth episode in Season 2 of A High School Rockstar. It aired on March 30, 2013.

Trish’s work at Eco Japan is interrupted when a gas leak causes an explosion in the kitchen, causing others to blame the accident on Trish. Lexi misplaces the earrings that were given to her by Aaron on their first date and thinks that the earrings are somehow under the debris of the explosion where she thinks she left it.

Retrieved from "https://ahighschoolrockstar.fandom.com/wiki/Explosions_%26_Earrings?oldid=9654"
Community content is available under CC-BY-SA unless otherwise noted.