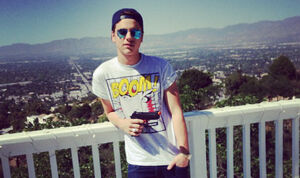 Garrett Backstrom was born and raised in Colorado Springs, CO. Garrett was an 11-year gymnast, two-time state champion. Garrett came to CA two years ago to pursue acting. He landed roles in two feature films and two television shows, as well as numerous commercials. He loves outdoor sports, including skiing and snowboarding. He is active in mixed martial arts & Krav Maga, hoping to utilize these skills in his future acting endeavors. Garrett also looks forward to a future in directing and/or producing.

Backstrom has guest starred in tv series and films like Lab Rats and JESSIE. He also has an upcoming appearance in the film "The Motel Life" to be released this 2012. He also got the lead role of Herman for "Hello Herman".

Retrieved from "https://ahighschoolrockstar.fandom.com/wiki/Garrett_Backstrom?oldid=9433"
Community content is available under CC-BY-SA unless otherwise noted.