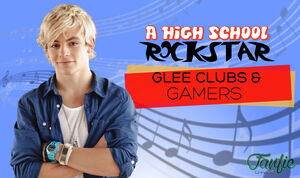 Austin, Tyler and Aaron gets addicted to a video game that they play for six hours straight. To help them get their minds off the game, Ally signs up the whole gang to their school glee club, which also happens to have a competition in a week. Team Austin must now come up with a great performance when the club’s teacher falls ill.

Retrieved from "https://ahighschoolrockstar.fandom.com/wiki/Glee_Clubs_%26_Gamers?oldid=10059"
Community content is available under CC-BY-SA unless otherwise noted.