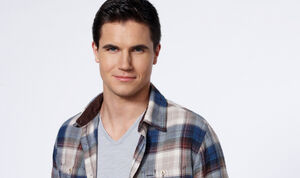 Harvey Statz is a recurring character in the Season 2 of A High School Rockstar.

Harvey is a smart guy. He loves the wild, just like Ally's mom. He goes with Penny to her expeditions in places like South Africa, and is the Assistant Explorer to Penny. Harvey also helps Penny with her books, and sometimes proofreads it before they decide to publish it.

Harvey does not often hang with Team Austin but they have some sort of a relationship. They know each other well, and sometimes gets along with Team Austin. Harvey is also named after a gorilla in Penny's book, as seen in "Movies & Marathons". Harvey got into the Nature Expedition together with Scarlett Malone, the reason why they are moving away.

Retrieved from "https://ahighschoolrockstar.fandom.com/wiki/Harvey_Statz?oldid=8852"
Community content is available under CC-BY-SA unless otherwise noted.