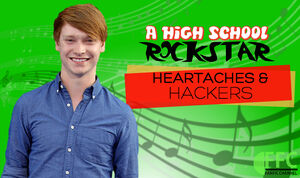 Heartaches & Hackers is the third episode in Season 3 of A High School Rockstar. It aired on November 9, 2013.

When Austin & Ally’s parents sees that their relationships are getting in the way of their studies, they form a scheme to get Austin & Ally to break up with each other. Meanwhile, Tyler accidentally hacks on to the mall computers and causes a power outage throughout the whole mall.

Retrieved from "https://ahighschoolrockstar.fandom.com/wiki/Heartaches_%26_Hackers?oldid=9297"
Community content is available under CC-BY-SA unless otherwise noted.