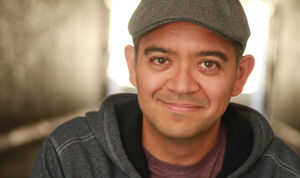 Ithamar Enriquez is an american actor, writer and director.

Ithamar Enriquez was born and raised in El Paso, Texas. After graduating with a degree in Music Theatre from Arizona State, Ithamar moved to Chicago to pursue his career in improvisation and sketch comedy. In Chicago Ithamar became a resident member of the famous Second City Company, where he performed and wrote in the touring company, ETC and Main Stage.

Since moving to LA, he has added teaching and directing to his Second City resume. As an actor, writer and director, Ithamar has been featured at The Comedy Central Stage in LA as well as The Austin Sketch Fest. Acting credits include: Arrested Development, Key and Peele, The Office, How I Met Your Mother, Raising Hope, Law and Order: LA, Jimmy Kimmel Live!, The Promotion and numerous national commercials.