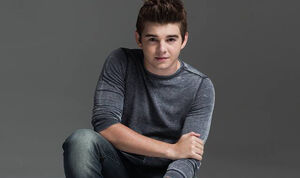 Jack Davis Griffo is a 17-year old actor born on December 11, 1996. Jack is from Orlando, Florida but moved to Los Angeles in 2010 to pursue his acting career. Jack plays the guitar and sings. His hobby is skateboarding. He is very close to his friends and his family.

Born and raised in Orlando, Florida, Griffo grew up in a household filled with the arts. At age two he booked his first commercial, and continued to book local acting and print jobs throughout his childhood. His older siblings were extremely active in regional theatre programs, which influenced Jack to also try his hand at acting. He shares, “All the other kids I went to school with were watching football and basketball games. I was going to see my older brothers in plays, that was really where my interest in acting began.” In 7th grade, Griffo began auditioning for plays being produced by his community theatre. He landed roles in A Christmas Story and To Kill A Mockingbird, and he was hooked. Soon after, his family decided to make a trip out to Los Angeles to try their hand at the big leagues.

Griffo officially moved to LA in 2010, where he immediately signed up for acting and improv classes, while developing his online presence with music and videos. He began booking guest star roles immediately on some of television’s biggest shows in the tween/teen market. From Nickelodeon to The Disney Channel, Griffo worked on some of the top rated shows in this market including “Bucket & Skinner,” “Kickin‘ It,” “Jessie,” “Marvin Marvin,” and a recurring role on “See Dad Run,” for Nickelodeon, which would ultimately help open doors for him at the network. He also got his foot in the door in the feature film world, booking a role in SOUND OF MY VOICE in 2011 for Fox Searchlight Pictures opposite Christopher Denham. In 2012, Griffo had a banner year, booking a sketch comedy pilot for Nickelodeon which nearly took the whole year to work on. It showed the network his acting and comedic chops- showcasing reality sketches where Griffo played himself, original characters, and his best spoofs of Justin Beiber and Zac Efron. He even was able to give a glimpse into his musical side, playing guitar on the show. As fate would have it the show was not picked up, which opened up a new opportunity and Griffo landed the series regular role of “Max” on “The Thundermans.”

On the music front, Griffo has achieved accidental YouTube success, boasting over 2 million video views on his account, and growing. His acoustic covers of popular songs on the channel has garnered him nearly 20,000 subscribers – and he continues to build the audience with the addition of new videos and content. When not working, Griffo loves to stay active- you can often find him at the beach surfing in the summer, or snowboarding in the winter. He is also active on the charity front, supporting the Children’s Hospital of Los Angeles, and Peta2. Griffo currently lives in the LA area, with his family.

Retrieved from "https://ahighschoolrockstar.fandom.com/wiki/Jack_Griffo?oldid=10094"
Community content is available under CC-BY-SA unless otherwise noted.