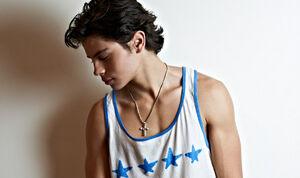 Jake T. Austin is an American actor and voice actor. Beginning a career as a child actor at the age of seven, Austin is a five-time Young Artist Award nominee, best known for his role as Max Russo, the youngest of three wizards on the Disney Channel original series Wizards of Waverly Place, and as the voice of Diego, the 8-year-old animal rescuer on the Nickelodeon animated series Go, Diego, Go!.

Austin was born Jake Austin Szymanski on December 3, 1994 in New York City, the son of Giny Rodriquez Toranzo and Joe Szymanski. His middle initial, "T" is taken from his mother's maiden name, "Toranzo". His mother is of Puerto Rican, Argentine, and Spanish descent, and his father is of Polish, Irish, and English descent. He has one younger sibling, a sister named Ava. Austin began his career in 2002 at the age of 7, with roles in commercials, and in 2003 he appeared in his first "credited" role as "Kid 1698" in a comedy sketch on The Late Show with David Letterman. He first gained notoriety in 2004, when he landed the role as the voice of Dora's adventurous 8 year-old cousin, Diego on the Nickelodeon animated series Dora The Explorer (credited as "Jake Toranzo Szymanski"). Austin continued to voice the role of Diego for three seasons as the title character on the 2005 animated spin-off series Go, Diego, Go!, as well as on the musical CDs Diego, Dora & Friends Animal Jamboree Album and Dora's Fiesta Album. During his time as the voice of Diego, Austin went on to lend his voice to several other animated projects including the popular feature films The Ant Bully, and Everyone's Hero, as well as Comedy Central's Christmas special, Merry F#%$in' Christmas and Playhouse Disney's musical Happy Monster Band segments.

In 2006, Austin landed the lead role of Angel Macias in his first live-action feature film, The Perfect Game based on a true story about the first non-U.S. team to win the 1957 Little League World Series, although the film wouldn't be released in the United States until more than three years after filming was completed, due to post-production financing difficulties. In 2007, Austin began what would become a prolific career with Disney when he was cast as Chris in the Disney Channel original movie Johnny Kapahala: Back on Board. Later that same year, he was cast as the youngest sibling, Max Russo on the Disney Channel original series Wizards of Waverly Place alongside Selena Gomez and David Henrie. Wizards debuted in October 2007 and quickly became a fan favorite, lauded for its portrayal of Latinos and winning the Emmy Award for Outstanding Children’s Program in 2009, as well as ALMA, Imagen and NAACP Image Award nominations.

In 2009, Austin made his live-action feature film debut with a starring role as Bruce, an orphan who hides numerous dogs in an abandoned hotel, in the Dreamworks family film Hotel for Dogs, while later that year, The Perfect Game debuted at the 2009 Guadalajara International Film Festival. In the summer of that same year, Austin appeared as Max Russo in a crossover episode of the Disney Channel series, The Suite Life On Deck and in the Emmy Award winning Wizards of Waverly Place: The Movie, Disney Channel's television film adaptation of the series. In the spring of 2010, after almost four years, and several postponed release dates, The Perfect Game was released in U.S. theaters by Lionsgate. In the fall of that year, Austin was named as one of "The 25 Brightest Latino Stars Under 25" in the October 2010 issue of Latina Magazine, along with his Wizards co-star Selena Gomez.

As of 2011, Austin currently stars as Max Russo on the fourth and final season of the Emmy Award winning series Wizards of Waverly Place. The final episode of the series wrapped production in May 2011, and is scheduled to air in early 2012. In April 2011, Austin voiced the role of Fernando, an orphaned Brazilian boy who is forced to capture exotic birds, in the 20th Century Fox 3-D animated musical feature film, Rio. In December 2010, it was announced that Austin would be teaming up with Pilgrim Films & Television productions as co-executive producer of a new reality series that will focus on a group of families in the Los Angeles area as they put their lives on hold to pursue their children’s dreams of acting, singing and/or modeling, with the pilot episode scheduled to begin filming in mid-2011. In March 2011, it was announced that Austin would have a role in Gary Marshall's romantic-comedy, New Year's Eve, released in December 2011.

Austin guest starred in the long-running NBC legal drama, Law & Order: Special Victims Unit in the episode "Home Invasions" as Rob Fisher, the boyfriend of a girl whose family is massacred. "It's an honor to be a part of such a respected series," Austin said in a statement to The Huffington Post. "Being a New Yorker myself, I'm a huge fan of the show and can't wait to start filming."

Austin is fluent in both English and Spanish, and currently divides his time living in Los Angeles and New York with his parents, his younger sister Ava, and the family's two dogs, Bogey and Beju. His family owns an historic restaurant called ‘The Clarksville Inn’. The restaurant, located in West Nyack, New York, originally opened in 1840 as a hotel. Austin attends public school when he is in New York and has his school work sent to him when he is away filming. Along with writing, directing and acting in shorts for his YouTube channel "Jakeethekid", he has also written, and sold his first screenplay titled "Kings of Suburbia" which he has said is written in the same vein as his favorite film Stand By Me.

When he isn't busy with school and work, Austin devotes his time to various charitable causes including the Make-A-Wish Foundation, which grants wishes to children who have life-threatening medical conditions, the Starlight Children's Foundation, which is dedicated to improving the quality of life for children with chronic and life-threatening medical conditions, and Variety's Power of Youth initiative, which partners with young stars to help raise money for their chosen causes.

Retrieved from "https://ahighschoolrockstar.fandom.com/wiki/Jake_T._Austin?oldid=8693"
Community content is available under CC-BY-SA unless otherwise noted.