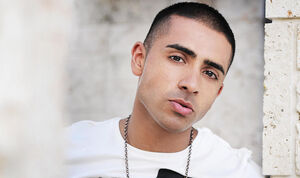 Jay Sean is a British singer-songwriter, rapper, beatboxer and record producer. He debuted in the UK's Asian Underground scene as a member of the Rishi Rich Project with "Dance with You", which reached No. 12 on the UK Singles Chart in 2003. This led to him being signed to Virgin Records and having two UK top 10 hits as a solo artist in 2004: "Eyes On You" at No. 6 and "Stolen" at #4. They were included in his critically acclaimed debut album Me Against Myself which, though only moderately successful in the UK, sold more than two million copies across Asia and remains his most successful album to date. Alongside the Rishi Rich Project, Sean was a pioneer of Bhangra-R&B fusion, which his debut album helped popularize among the worldwide South Asian diaspora.

Jay Sean was born as Kamaljeet Singh Jhooti in Harlesden, Northwest London to Sharan and Bindi Jhooti, Punjabi Sikh immigrants. He was raised in Southall, west London, and displayed musical talent at an early age. At age 11, he and his cousin Pritpal Rupra formed a hip hop duo named "Compulsive Disorder". His stage name at the time was MC "Nicky J", with the "J" being derived from the first letter of his last name "Jhooti". He eventually came to be known by the nickname "Jay" among his friends.

He was a student at Latymer Upper School, the same private school that Hugh Grant, Heston Blumenthal and Lily Cole had attended. He left the school in 1997. He finished his GCSEs as a "straight-A student" and then completed his A Levels with an A grade in Biology and B grades in Mathematics and Chemistry. He later enrolled in Barts and The London School of Medicine and Dentistry at Queen Mary, University of London, to study Medicine before he dropped out in 2003 to pursue a singing career. For his music career, he chose the stage name Jay Sean; "Jay" being his nickname, while "Sean" is derived from "Shaan"—a nickname he was called at home by his grandmother—which means "shining star" or "pride" in Punjabi.

After Sean's track "One Minute" fell into the hands of producer Rishi Rich, the Rishi Rich Project was formed (consisting of Rich, Sean and Juggy D) in 2003. Their first taste of UK chart success was the Asian underground song, "Dance with You (Nachna Tere Naal)", which became a Top 20 hit, peaking at #12. This led to Sean signing a £1m deal with Virgin Records, under their label Relentless Records. His second single, "Eyes on You," was his first solo effort and became a Top 10 hit, peaking at #6. His third single, "Stolen," peaked at #4, with Bollywood actress Bipasha Basu making an appearance in the video. His debut album, Me Against Myself, was released in 2004 and received much critical praise and acclaim. Sean was referred to as an "Asian sensation" and was praised for his experimental, creative fusion of contemporary R&B, British hip hop and Indian music. The title track in particular was considered innovative, featuring two alter egos of himself, one an R&B singer and the other a rapper, clashing in a rap battle.

Despite initially failing to reach the top 20 on the UK Albums Chart (where it peaked at #29), the album gradually managed to sell 100,000 copies in the UK and went on to become a substantial hit in India, selling over two million copies there. He made a brief appearance in the 2005 Bollywood film Kyaa Kool Hai Hum, providing the song "Dil Mera (My Heart)" to the soundtrack, based on "One Night" from his own debut album. Beyond India, the album sold over 300,000 copies across other parts of the world, including Europe, the Middle East, Southeast Asia, and Hong Kong. His performance of tracks from Me Against Myself on MTV Asia (alongside the Rishi Rich Project) had a television audience as large as 165 million viewers. It helped establish Sean as a major recognised artist across Asia and among the worldwide Desi diaspora, and remains his most successful album to date. With his debut album, Sean was influential in popularising Indian-R&B fusion sounds in Asian underground and Indian pop music. He recorded a 16 track album which was scrapped because Virgin felt the market had changed to where it was all about Pop music. In February 2006, after several delays of his second album, he left Virgin Records.

Sean began working on his fourth album and second with Cash Money Records Freeze Time in July 2010. At the time, he stated that he had completed roughly 75 percent of the album and that guests included Lil Wayne, Pitbull, Nicki Minaj and Mary J. Blige. Three singles, "2012 (It Ain't the End)", "Hit The Lights" and "Like This, Like That" were released in support of the album. Sean also co-headlined with Joe Jonas on the Joe Jonas & Jay Sean Tour with JoJo as the opening act. Sean released a mixtape titled The Mistress in September 2011 and a Japan exclusive album titled Hit the Lights in January 2012.

Freeze Time was scrapped due to legal issues in 2011 and Sean began working on a new, be more R&B influenced album altogether. Sean's upcoming album Neon is set for a 2012 release. The first official single from the album was announced to be "I'm All Yours", which features the rapper Pitbull. The song had its radio premiere on 18 April 2012. The track was officially released to US radio on 22 May 2012 and digital retailers on 29 May 2012. The song peaked at 85 on the US Billboard Hot 100. The song's best performance was in Australia where it peaked at 13 and was certified as Gold. The second single of the album as revealed by Jay Sean himself, is to be called "So High", which is also said to be featuring the DJ Afrojack. In February 2013, Jay Sean announced he would be changing the title of the album from Worth It all to Neon.

Retrieved from "https://ahighschoolrockstar.fandom.com/wiki/Jay_Sean?oldid=9396"
Community content is available under CC-BY-SA unless otherwise noted.