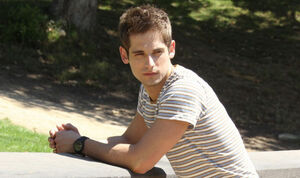 Jean-Luc Bilodeau is a canadian actor who has been acting since 2004. He is best known for his role as Josh Trager in the ABC Family channel program Kyle XY. Bilodeau has also appeared in films and television series such as Ill Fated, Trick 'r Treat, 16 Wishes, No Ordinary Family and Best Player. He was also in Emmalyn Estrada's music video "Don't Make Me Let You Go".

Bilodeau is the son of Raymond and Barbara Bilodeau and has a sister, Danielle, who is a talent agent in Vancouver, British Columbia. Before becoming an actor, he was a dancer for nine years, but dropped dancing because of his busy film schedule. He is also known as Jay in the original Disney movie 16 Wishes, starring Debby Ryan; Ash in the Nickelodeon original movie Best Player, starring Jennette McCurdy and Jerry Trainor; and is currently Lead role playing Ben on the new ABC Family series Baby Daddy. Jean-Luc also took part in the film "LOL", starring Miley Cyrus.

Retrieved from "https://ahighschoolrockstar.fandom.com/wiki/Jean-Luc_Bilodeau?oldid=9439"
Community content is available under CC-BY-SA unless otherwise noted.