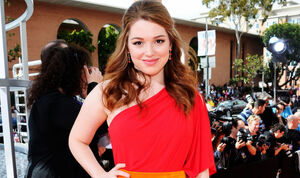 Stone was born in Arlington, Texas. She began acting at the age of six in local theaters. She signed with an agency at the age of eight.

Stone's break came when she was cast as Martha in New Line Cinema's Secondhand Lions. She received a Young Artist Award nomination for her role in Secondhand Lions as well as a nomination for her 2005 guest appearance on House, M.D. She guest appeared on Line of Fire and Without a Trace. In February 2007, she joined the main cast of Disney's Wizards of Waverly Place as Harper. She has made YouTube videos with Wizards co-stars Selena Gomez and David Henrie, and created her own YouTube channel.

In 2009, she had a voice role in the Disney Channel Original Movie Dadnapped. She also lent her voice to Phineas and Ferb as the voice of Amanda, Candace's daughter in the future in 2 episodes. In 2010, she played the main character in the film Harriet the Spy: Blog Wars. In 2011, she was in the film Mean Girls 2 playing Abby Hanover.